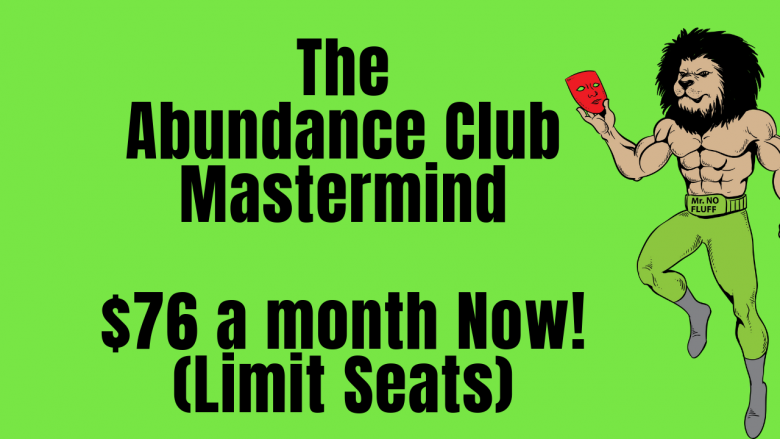 Forget the self-help books. Stop trying to do it all on your own. If you want to succeed, you have to surround yourself with success, or at least those who are as hungry as you are for it.

“You’re the average of the five people you spend the most time with.” -Jim Rohn

Have you heard this quote before? Jim Rohn was the epitome of success. Though there were plenty before him and there will be plenty after him, all successful people have one thing in common – the balls to go after what they want and never let anything get in their way. If you could ask a successful person any question, what would it be?

You can find the answers to these questions and more in my Abundance Club. By surrounding yourself with people who have either made their dreams come true, are in the process of doing so, or want to learn how to get there, you’ll be continuously inspired.

Joining Mastermind Club lights a fire under your ass. Every conversation and bit of advice you pick up stocks the fire and keeps it not just burning but exploding.

We all have dreams. We all aspire for more. But such a small percentage of us ever act. Dreaming is fun but work sucks.

I know a lot about work. I know what it takes. Let me share my story with you.

Remember the time you had a dream and someone crushed it by telling you “NO you can’t have it!” and it made you more relentless to chase it with dogged determination just to show them who’s really boss?

That was me 12 years ago. Before hitting Real Estate success, it was the stinky banker telling me “NO, you can’t buy that house!”. Even though my moving business was making millions,It was 2006 4th quarter, the worst market crash and the rivers of money had dried up. No banker was lending a penny those days. Not to me, not to anyone.

Since they were going belly-up, and none too eager to fund my investments, I was forced to get creative with funding. So I did what 99% of the population secretly wants, but doesn’t know how to do it…
I mastered my no-money, no debt techniques and before I knew it, deal after deal I went on to make hundreds of thousands in deals. I built systems around these techniques and teach my students across the nation the same formulas to build wealth, or start businesses without begging the bankers and they’re doing pretty nicely for themselves too…Like taking trips with their wives to Hawaii

It’s my way of thanking the whole banking system by giving them, not just one nice middle finger, but two.  Who’s the boss now?

WHAT’S INCLUDED IN THE PROGRAM?

Abundance…For Less Than A Cable Bill!

We focus on all aspects of business in The Abundance Club Mastermind Group. From tiny tips to life-altering lessons, everything’s covered.

HERE IS WHAT YOU GET
1) Once a Week Coaching Meeting. (4 meetings per month)

5) An environment that pushes you to keep going and succeed

5)  Plus be your dreams at the comfort of your own home, office, or coffer shop without having to commute in traffic, right from  your computer or smart phone  or Tablet. (Isn’t that cool!?)

6) You’ll Never Miss Out…If you have plans and you’re not able to make it to a meeting, we will email you the recording.